Mineralization is hosted within a large variety of rocks of several ages; however, most gold bearing quartz veins are hosted primarily by igneous and metamorphic basement rocks. These include banded gneiss, granite, leucocratic granite, schists, gabbro, pegmatites varying in age from Paleoproterozoic (~1800-1600 Ma) to Mesoproterozoic (~1400 and ~1100 Ma) Damon et al., 1961, Anderson and Silver, 1979, 2005; Iriando et al., 2004. Gold is associated to several pulses of different ages due to continued tectonic activity.

The project generally consists of two physiographic expressions: an extensive plain of Quaternary gravels and colluvial occupying the west portion of the area of the project; and Sierrita Prieta, a series of small rugged hills where two units of Precambrian Rocks are exposed.

Sierrita Prieta is mostly composed by Precambrian gneiss, and more commonly found here is the grey or black foliated quartz-feldspar-biotite gneiss, banded from mm to cm. It is magnetic gneiss.

Coarse porphyritic granite with crystals of feldspar up to 3-4 cm at the north of the Sierrita Prieta. It is pink to dark gray in color, weakly foliated, with halos of hematite along the foliation planes.

At the southwest portion of the property, there are some isolated outcrops of granite. Mainly in the areas known as Pepitas and Represo Seco, with gold mineralization in semi-horizontal quartz bodies. Further to the southwest, limestone and sandstone outcrops have already been identified off the surface of the concessions controlled by Magna, and in the vicinity with Represo Seco are isolated outcrops of amygdaloid and vesicular basalt of pad structures. 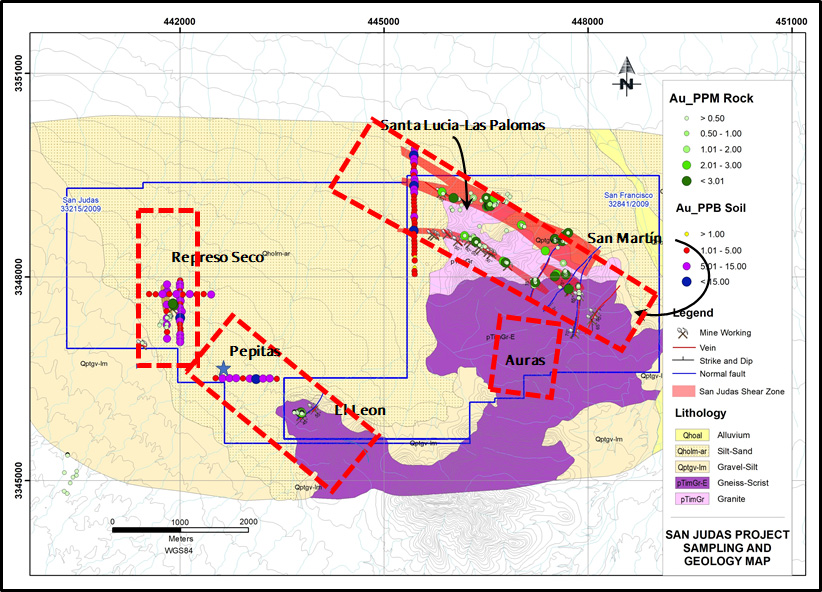